Ocean Cove is located in Dumoy within Talomo District in Davao City. It is located within a short drive away from the downtown area and some of the key destinations within Davao City. And yet, it is also somewhat secluded such that you can enjoy your sense of peace and quiet away from the city. If you want to live outside of the city center, this is the ideal place to live in. You can be close to the beach and have your own privacy that is away from the stress of the traffic and chaos.

However, you won’t be sacrificing much when it comes to convenience by choosing to live in Talomo area of Davao City. It is still fairly accessible to the major commercial establishments such as banks, malls, and shops. In fact, there are several developments over the past few years in the southern portion of Davao City, which means you can enjoy modern conveniences within the Talomo area without the need to travel to downtown.

In addition, the location of Ocean Cove Davao is around 700 meters from the national highway. It is specifically located in Brgy. Aplaya in Talomo, which is 12 kilometers away from the city center of Davao. In addition, it is also close to other major roads and highways that would make it convenient to travel to other parts of Davao City. The location of this development makes it easy to access the Pan-Philippine Highway, Davao-Bukidnon Highway, and the McArthur Highway.

While the development site is already equipped with many resort-like facilities and amenities, it is also located within close proximity to other major resorts and tourist attractions in Davao City. For instance, the Mergrande Ocean Resort is only a few minutes away from Ocean Cove. The Apo Golf is also located within 2 kilometers from the development. Ocean Cove Davao itself is fronting the Davao Gulf; hence, you can enjoy swimming at the beach or the view of the Davao Gulf from this subdivision.

For your basic needs, there are several hospitals near the area. Hence, you no longer have to travel to the Southern Philippines Medical Center to get the medical and health services you need. Some of the hospitals located nearby include St. Felix Hospital, Davao Sanitarium & Hospital, and the Adventist Hospital. Meanwhile, if you are looking for a great school nearby, you also don’t have to worry about traveling far to send your child to school. There are great schools near Ocean Cove, such as Philippine Science High School, UP Mindanao, Davao City Special National High School, and Apolinario Mabini National High School.

When it comes to your shopping needs, you can find NCCC Mall, SM City Davao, NCCC Centerpoint, and S&R. Meanwhile, the Matina Public Market is a few kilometers away; you can go to this market for fresh supplies of meat and vegetables. It will save you time from traveling to the central public market of Davao in Bankerohan. There are also a few other commercial establishments located in Talomo to provide for your basic needs such as Shell Gas Station, Mercury Drug, Phoenix Gas Station, SaveMore, BPI, and Jollibee. 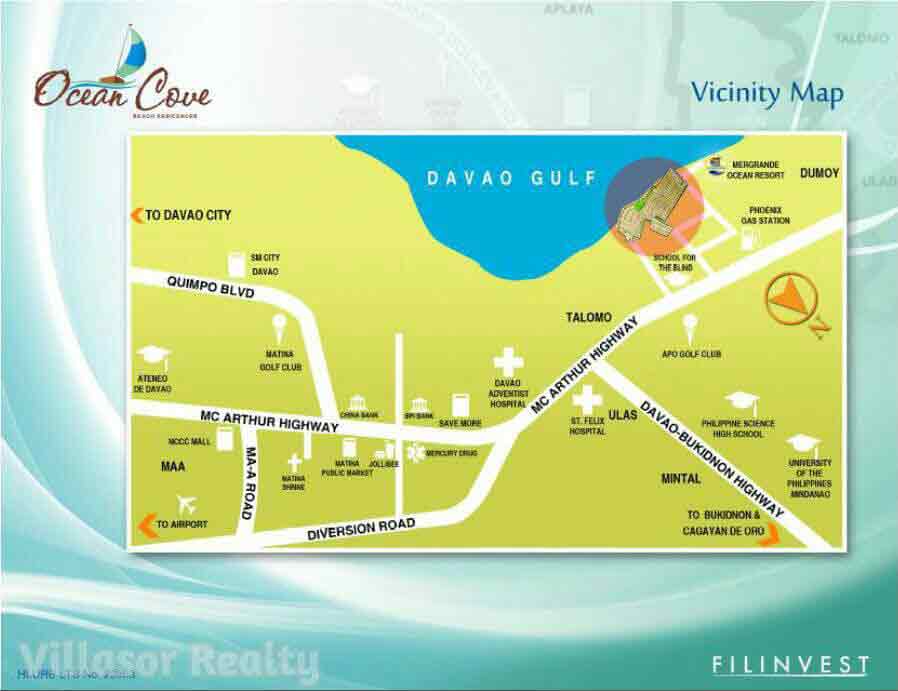